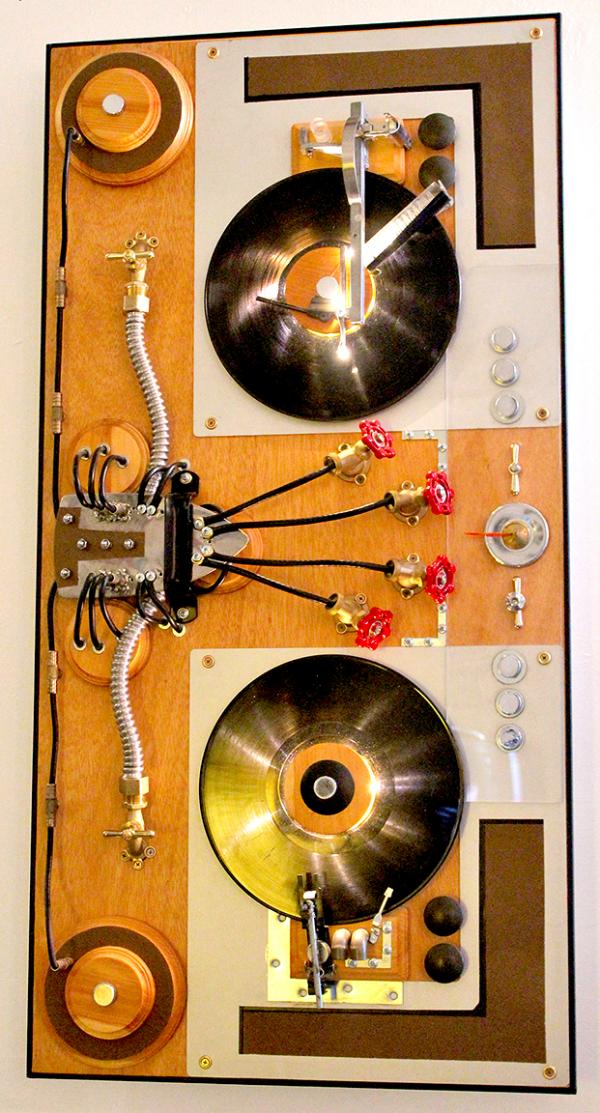 DESCRIPTION:  I created this sculpture because I wanted to convey my appreciation for music, in particular for the music that DJ's create. I wanted to build a new imaginary instrument by using found objects. In this particular piece there are parts from household objects that came from: an iron, oven, records, cables, lamps, sewing machines, typewriters, televisions, faucets, and so on. I wanted to keep to the theme of House Music in particular, so I used house-hold appliances when building it. I wanted the elements such as wood, metal, and glass to compliment each other. My goal was to make a piece of art that was airy and left room for it to breathe. I spaced everything as to give each house hold item it's meaning as if it did truly make music. The two records obviously look like a turntable in the way in which I laid them out. I added tiny white L.E.D. lights to the sculpture in order to illuminate the records. I wanted to provide the piece with some functionality as well as an extra sense of ambiance. I wanted the viewer to be able to make a correlation between something that they all ready recognized and yet something that was new. I tried to give this piece a space aged modern look, while also the look of an engine. I used the iron as the main hub where the cables come in and out of.  I used faucets as the controls that would either provide more or less energy needed when making the music. I used oven knobs as the knobs that could control the turntables. I purposely used organic colored metal and wood so that the piece would be easy on the eyes and not over complicated the way a real musical instrument would appear. I did want something to shout out though, and this is why I chose to use the Red faucets. I felt this one bold color choice would give a pulse or heart to the instrument, as if the color was actually the symbol of the music itself.